Following video greetings and the first bunch of pictures, we continue our FedCon coverage with what turned out be one of Luciana’s best (video) interviews to date. 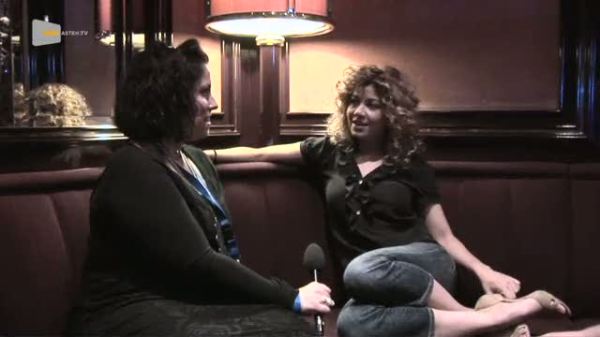 Serieasten.TV, a German videoblog made by fans of TV series for fans of TV series, conducted a long interview with Luciana at FedCon. The video runs for 18 minutes, and a very relaxed Luciana took the time to talk in detail about her characters and work on Battlestar Galactica and Caprica, respectively. In addition, she reflects on the differences between those shows, and reveals how much she would love to be on Broadway. Of course, the interview wouldn’t be complete if she didn’t tell the story of how she found out about Kat’s death. ;-) This video is certainly worth watching.

Of course, the interview wouldn’t be complete if she didn’t tell the classic story of how she found out about Kat’s death. ;-) This video is certainly worth watching. And don’t worry, whereas the introduction is in German, the interview itself is in English.

If you are a fan of Battlestar Galactica (and most readers of this blog probably are), you may also want to watch the interviews Serieasten.TV has done with fellow Battlestar guests at FedCon, Kandyse McClure, Aaron Douglas and Tahmoh Penikett.

(Note: Be sure to have the latest version of the Quicktime plugin to be able to watch the videos.)