First picture of Luciana in Caprica

I am extremely happy to present the very first picture of Luciana as Priyah in an early episode of Caprica (click for full size): 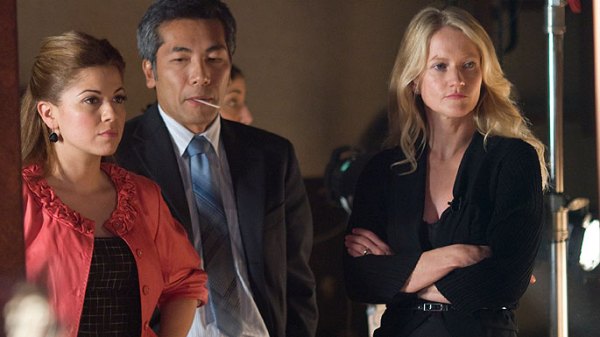 Luciana Carro as Priyah in an early episode of Caprica

Looking really good, isn’t she? The one true goddess will drive out the many… Obviously, Luciana wasn’t joking when she said she enjoyed playing a character that was much more cleaned up than Kat.

I found this still in the Amanda Graystone gallery at the official Caprica website. By the way, also in the picture are Hiro Kanagawa and Paula Malcomson, the actors who portray Daniel Graystone’s assistant and wife, respectively.

Hence, this stills seems to confirm a small detail that was revealed at last weekend’s Starfury con in London: Contrary to our own speculations, Priyah is not an investigator, nor a spouse of Clarice’s – she works for Daniel.

Speaking of “Mission Starfury: The Cylon Attack”: Frosty has yet to fully recover from his latest encounter with Luciana ;-), so it will take a little more time until we post our first report on this convention.

This entry was posted in Other and tagged Caprica, Caprica Pictures, Photos, Pictures, Stills. Bookmark the permalink.

4 Responses to First picture of Luciana in Caprica