Peek behind the scenes of Phantom Racer

As readers of this blog probably know, Luciana’s new movie Phantom Racer will air on August 22 on Syfy. 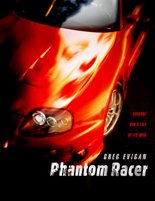 But since this is a movie of the week, and Syfy doesn’t exactly make much of an effort to promote its MOWs, there is virtually no news about this film.

Yet, while we haven’t found any material directly related to Luciana, we now know a little better what to expect from the movie. That’s because actor Brett Dier posted a short behind-the-scenes video and a photo of one of his scenes on his Facebook page. But be warned, it’s quite graphic. In fact, it’s more graphic then we expected, even for a horror movie.

Luciana is in neither the video nor the photo, and it’s unlikely Syfy or anyone else will bother with releasing more behind-the-scenes or promotional material. So this is pretty much the first footage from the movie so far and we probably won’t get any material that features Luciana.

Also, distribution/production company RHI Entertainment put up a page for Phantom Racer. Luciana is billed fourth in their cast list, so there is at least a chance that her role might be bigger than we originally expected.

Of course you are welcome to discuss Phantom Racer on the Fanboard.