First of all: Welcome to our new readers! :-)

Since Luciana (♥) plugged the blog on her Facebook fanpage again, our tiny numbers have been going through the roof. I hope the newbies will enjoy all the interviews, pictures, reviews and unapologetically fanboyish ramblings – just as much as we and our veteran readers do (I think). If you have anything to say about a particular post, or the blog in general, please don’t hesistate to use the comment section. Oh, and make sure to subscribe to our RSS feed!

I just noticed that Sci Fi Crush wasn’t the only website that interviewed Luciana at her booth. Says Amelia Tyler from SciFi.co.uk:

Gorgeous BSG actress Luciana Carro (Kat) told us about the difficulties of making the show, her favourite on-screen moment (which included a MASSIVE spoiler so I wont tell you!) and her Japanese fighting fish named Damian (which made the non-aquatic Damian very happy indeed).

[The interview] will be up online very soon. Promise!

Wow! I didn’t know she had a fish. First, Macadamia nuts, and now this! Can’t wait to watch that interview… and once it’s online, you guys will be the first to know. Well, almost.

What? You want more?

Alright, as it happens, we got a couple new and fantastic photos of Luciana that were taken during the Battlestar Retrospective panel, at her booth, and at the red carpet for some Syfy party.

First, the following two stunning pictures were sent in by JR (as always, click to see the full-size version): 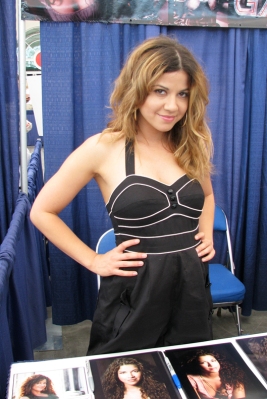 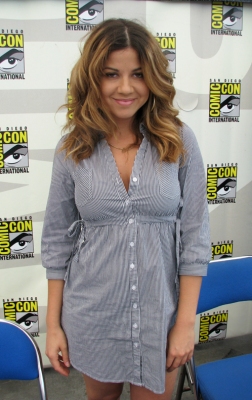 Second, please join us in marveling at the pretty posing. Oh my.

Third, Cassie kindly posted these three beautiful shots from Entertainment Weekly’s Syfy Party (that is, only actors, writers and the like were in attendance)

Last but not least, I’m happy to present six pictures taken by Jim “Scarbuck” Quon (two of which were previously available, but not in full size)